What the media says about us.

Students Abhishek Sharma, Ruturaj Bargal and Yash Murty from IIT Madras have come up with an idea for a start-up that takes people on food walks.

They have started Blaffer (meaning hitchhiker) to do something for those with an unquenchable wanderlust. The idea is about exploring new places and trying different things. “We are backpackers at heart, so we wanted to put a piece of ourselves in the name,” explains Ruturaj Bargal.....

When and where was Paav Baaji first sold in Chennai?
Find out this weekend!

Blaffer is a group of IIT Madras boys who get together every week to take you on a food trail you will love- tat too on a budget of Rs 400... 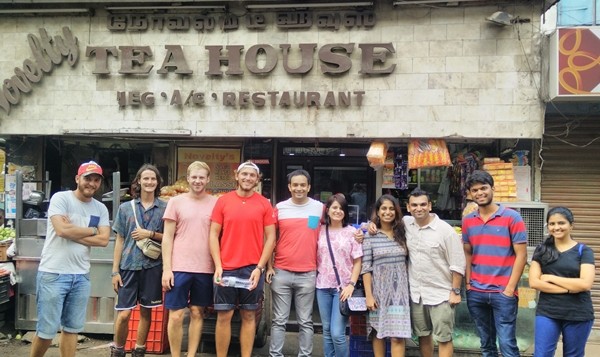 Inspired by the food walks they did in Singapore and Kuala Lumpur, three B Tech final year students from IIT Madras have launched Blaffer, a website through which they organise food tours. The city-based start-up that launched late January, is the brain child of Ruturaj Bargal (from Indore), Abhishek Sharma (New Delhi) and Yash Murty (Pune).

“We mostly target backpackers and hitchhikers. So we picked the name Blaffer, the Danish word for hitchhiking,” explains the 23-year-old, adding that they take turns to play guide. “A walk will cover five to six eateries — like the famous Kakada Ramprasad or Mylai Karpagambal Mess — letting people taste about 10-12 dishes.....